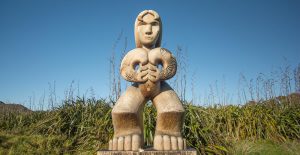 There are several Maori carvings (or Pou) that we see on our day tours out to the West Coast. On our coast and rainforest tour we always see at least one. This one is at Mercer Bay which is between Piha beach and Karekare beach. Excavations have shown that this area is one of the oldest settled parts of the Waitakere Ranges so is of special significance to Te Kawerau a Maki. This pou depicts Hinerangi, a chiefly young Ngaoho woman named after an honoured Turehu ancetress. 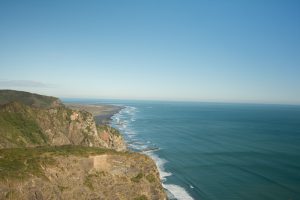 The carving was done by Sunnah Thompson of Te Kawerau a Maki, and was unveiled in 2011. It is located on the Mercer Bay headland you can see to the right which is just north of Karekare Beach.

The pou has an information panel next to it giving the full story of Hinerangi and below is a copy of what it says.

This carved pou symbolises the manawhenua, or spiritual guardianship of Te Kawerau a Maki, the local Tangata Whenua. It also recognises that this is a special place, one of the oldest settled parts of the Waitakere Ranges.

This Pou specifically relates to an early Tupuna, Hinerangi, a chiefly young Ngaoho woman named in honour of a renowned Turehu ancestress. 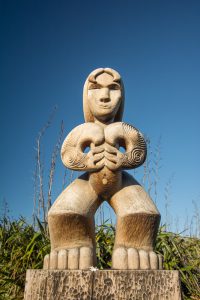 Because of her beauty, skill and descent, many young rangatira sought her as a partner. Eventually Hinerangi chose a young chieftain from Karekare and settled there in his village and lived happily until an aitua or tragic accident.

At the southern end of Te Unuhanga o Rangitoto or Mercer Bay was a famed fishing spot known as Te Kawa Rimurapa (reef of the bull kelp). One day Hinerangi’s husband and two others went fishing there and were overwhelmed by a large wave and tragically drowned.

Distraught, Hinerangi climbed to this headland and scanned the seas of Waikarekare, longing for her husbands return. Inconsolable Hinerangi sat on this headland for days until she too died of a broken heart and set off along Te Rerenga Wairua (journey of the spirits) to join her beloved.

Her disconsolate face was forever etched into the rock face of the headland on which she sat. It became known as Te Ahua o Hinerangi (the likeness of Hinerangi) and can still be seen today from the cliffs high above the southern end of Te Unuhanga o Rangitoto (Mercer Bay).