New tour to Hobbiton and the Good George Brewery

Bush and Beach have teamed up with Hobbiton Movie Set and Good George Brewing Hamilton to offer a day trip to 2 gems of the Waikato on this small group tour from Auckland. we have called it the Hobbiton and Hops tour. 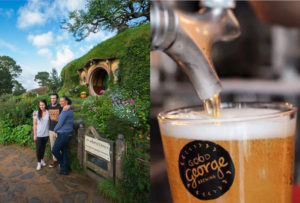 The tour of the brewery includes a tasting and a pizza as well.